Live an extraordinary experience among Greek myths and legends in Selinunte! We have picked the most comfortable and well-positioned villas in Selinunte, on the South-west Sicilian coast, for you in this catalogue.

Look now at our catalogue of Selinunte villas and pick your favourite! 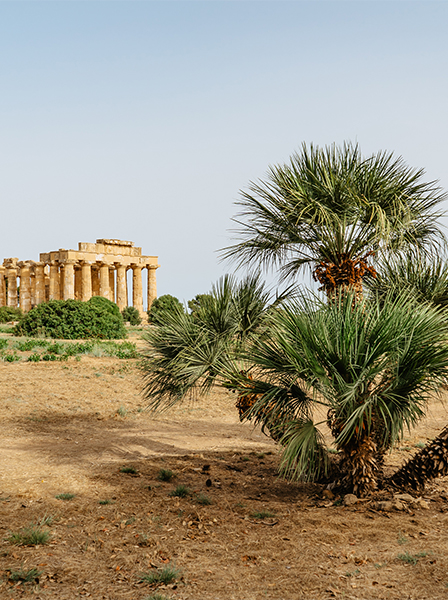 Selinunte is one of Sicily’s great Greek archaeological sites. It is located in the southwestern part of Sicily and has stood abandoned for most of its history. Specifically, it is located in the territory of Castelvetrano inside the Trapani district.

Selinunte was founded in the VII century B.C by Greeks coming from Megara Hyblaea and it was spread over a couple of low hills on the seashore.

The town was expanded during the VI and V centuries  B.C., that is the period in which its large temples were built. The Carthaginians attacked Selinunte in 409 B.C. and ruined many of its buildings, and this marked the end of a great city from an architectural point of view.

The destruction of the site was aggravated by the fact that, during the Middle Ages, several earthquakes occurred. The site was then forgotten until it was rediscovered around the XVI century.

During the XIX century, numerous archaeological excavations were made, and they still continue to this day thanks to the great number of fascinating finds.

Today, the site covers around 270 hectares, and can be divided into the following areas:

The first building when you enter the site is Temple E, which is the largest. This Doric temple was restored in the 1950s and stands on a rise. Visitors are allowed to climb inside the temple.

Today, on the western hill there is a small museum which exhibits finds from the site.

Our expert team has carefully selected our collection of villas in Selinunte to make you live the most authentic experience ever in this fantastic area of Sicily!

If you want to immerse yourself in the history and traditions of this fantastic location, you should visit the old town centre with its small streets during the day to see the characteristic shops and bars and taste some local specialities.

Moreover, we recommend you visit the Archaeological Park and discover its beauty. Visiting this site in Selinunte means taking a plunge into the past and immersing oneself in a particularly evocative atmosphere, despite the fact that some 2,500 years have passed since its destruction.

Furthermore, we highly advise you to visit the uncontaminated beaches of Selinunte such as Pineta, Scalo di Bruca, Asinello Reserve and so on.

Our catalogue offers you the possibility of choosing one of the best villas in Selinunte to live a unique experience!

Selinunte is well-known for the Greek ruins, and its uncontaminated beaches, but many other places worth visiting.

You should also visit its historic centre where you can admire the lovely small streets, smell the local flavours, and taste the typical dishes. If you want to buy fresh seafood, we recommend you go to Scalo di Bruca square, where there is an open fish market every morning!

Browse our collection of villas in Selinunte and find your perfect estate!